This is the second half of a 2-part “How I made it” post. You can find the first half here.

At the end of step 4, I had a flat color study with a main color (blue) and a complimentary pop color (yellow-orange). It looked like this:

To make the illustration look 3-dimensional, I added simple 2-value shading. Each object was rendered with 2 colors: one for the light side, and one for the shadow side. Then I added a supporting color (purple) and a few more spots of the pop color.

Once I was happy with the shading, I turned off the sketch layer.

I cleaned up the edges of the 2-value rendering and added some transitional values to the round forms. I also created one new layer for the robot and one for the furniture.

At this point, the painting looked like a 3-dimensional version of the composition sketch. So I took a break and sent copies to a few friends for feedback.

Feedback, evaluation and revision aren’t really a single step. They’re more like a loop that I repeat several times while working on an illustration.

The first loop refined the lamp (making it much thinner), table (moving it over and making it look more like a real end table), and recliners (changed the arm rest on one, redrew the other so it was easier to identify). I also adjusted the back wall and moved the poster so the superhero wasn’t partially hidden behind the recliner.

By the time the first feedback, evaluation and revision loop was finished, I had received lots of good feedback from my friends. It revealed three major problems. First, the robot looked too old. I was imagining a 7-8 year-old, my friends were imagining a teenager. Second, the super hero poster looked like a pin-up. Her golden belt and the medallions that fastened her cape looked like a bikini. Third, the story wasn’t clear. I wanted a young character who daydreamed about being a superhero. It wasn’t coming through.

To fix the problems, I made the robot’s head a little bit bigger than their body, to give them a little more kid-like proportions. I redrew the superhero, replacing the belt and medallions with a star logo and added a superhero-themed teddy bear. I added a robot-head sketch to the sticky note covering the superhero’s face.

The blanket on the back of the chair didn’t solve anything, but it did make the room look a little homier and added another patch of supporting color. I may also use it as a home-made cape in another illustration.

The teddy bear was its own miniature design project. I sketched 17 different bears to get to this design, starting with a conventional bear and wandering off in different directions until I found something I liked.

A special “Thank you!” to my friend Della, for showing me how real kids hold their stuffed animals.

This is an old habit. At the beginning of my career, I discovered that it was easy to miss problems in the background once I finished main characters. It made my illustrations look inconsistent and unfinished. Now I work from least important to most important, and everything looks finished.

Finally, I finished the robot. I also cleaned up a few details and added a signature. 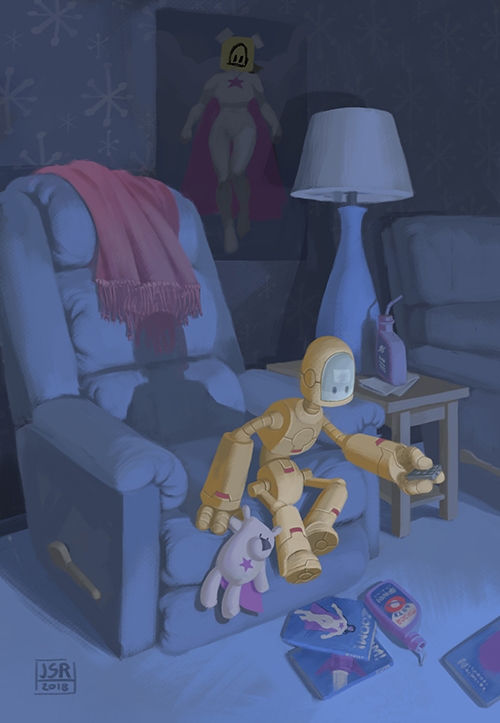